Vibrant trade continued Wednesday at the conclusion of the Kentucky Winter Mixed sale in Lexington. The sale's second session built on Tuesday's strong start, posting an all-time sale record gross and median. The average was the highest in sale history in a non-dispersal year, and the second highest overall.

Brilliant Cut (Hip 541), second in the La Brea S. (G1) at Santa Anita last time out, topped the session and the sale when sold for $750,000 to Katsumi Yoshida late in the day (video). First-time consignor Highgate Sales, agent, offered the four-year-old daughter of Speightstown as a racing/broodmare prospect. Twice a winner and multiple graded stakes placed, Brilliant Cut has earned $164,360 to date. She was campaigned through 2021 by owners Boom Racing, ERJ Racing, Dave Kenney, and William Strauss and trainer Doug O'Neill.

Excluding dispersals, Brilliant Cut is the second most expensive filly or mare in sale history, second only to Better Begin, who sold in foal to Northern Dancer for $900,000 at the 1984 Kentucky Winter Mixed sale. A trio of dispersal mares have sold for more in the intervening years, including: Grade 1 winner Pool Land (in foal to Smart Strike), sold for $900,000 in 2013; dual-Eclipse Champion Roxy Gap (racing/broodmare prospect), sold for $850,000 in 2013; and French champion Tropicaro (FR) (in foal to Kris), sold for $825,000 in 1984.

"(There was) great activity on all types of horses and really all levels of horses," said Fasig-Tipton President Boyd Browning. "February has clearly established itself as a meaningful sale on the calendar that people can and should (point) horses to in the future. The ones that brought horses that were really of some quality were richly rewarded over the last two days."

For much of the session, first-hour offering Lady Edith (Hip 350) held the session lead after bringing $370,000 from Meah/Lloyd Bloodstock, agent for Abbondanza/Omar Aldabbagh (video). The four-year-old Street Boss filly was offered as a racing/broodmare prospect by Hermitage Farm, agent for The Estate of J. David Richardson et al. A winner at two and three, Lady Edith opened her four-year-old season with a win in the Wishing Well S. at Turfway Park on January 29. To date, she has earned $208,982. She was campaigned through 2021 by owner/breeders Richardson (Estate of) and Sandra New and trainer Thomas Drury Jr.

The session and sale's most expensive broodmare came in the form of Lucky Draw (Hip 369), in foal to Gun Runner, who drew a winning bid of $330,000 from Gracie Bloodstock, agent (video). Taylor Made Sales Agency, agent, consigned the seven-year-old daughter of Lookin At Lucky. Lucky Draw's first foal is You Look Cold, by Frosted, who won two times in four starts last year at two, including the Finest City S.

"I think we'll continue to have a very vibrant market," added Browning. "It's healthy, it's transactional, it's trading, but it's not ridiculous… We've had some overall growth and we've had some improvement overall in the marketplace and it does feel sustainable." 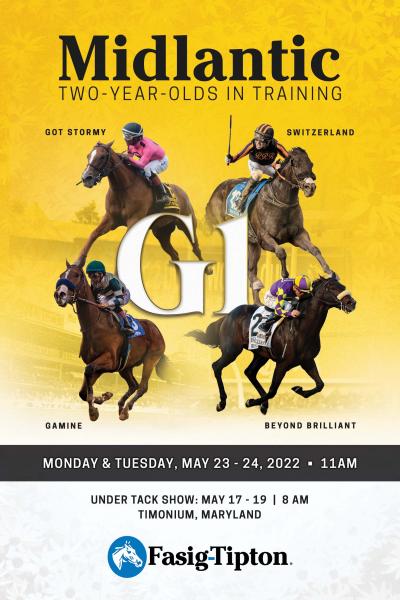