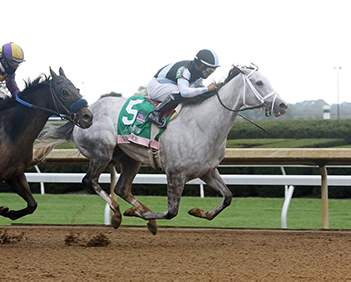 VALIANCE, winner of the Juddmonte Spinster S. (G1) this past weekend, will be offered at this year’s Fasig-Tipton November Sale on Sunday, November 8, at the company’s Newtown Paddocks in Lexington, Kentucky.  Bluewater Sales will consign the four-year-old old filly on behalf of owners Eclipse Thoroughbred Partners, Martin S. Schwartz, and CHC Inc.

VALIANCE, trained by Todd Pletcher, has won six of her eight career starts to date and earned $469,575.  She has won her last three starts since this summer, including the Eatontown S. on August 29, followed by the Juddmonte Spinster S. (G1) on October 4.  In the Spinster she defeated a top-class field that included Grade 1 winner OLLIE’S CANDY, and recent Kentucky Oaks (G1) victress SHEDARESTHEDEVIL.

VALIANCE’s next anticipated start is the Longines Breeders’ Cup Distaff (G1) on November 7 in Lexington.

“Eclipse has been fortunate to sell several seven-figure mares, including a $3 million sales-topper, at Fasig-Tipton’s Night of the Stars and it’s only fitting for Valiance to be one of the next in line,” said Aron Wellman, President and Founder of Eclipse Thoroughbred Partners.  “Our partnership, including Marty Schwartz and her breeder, China Horse Club, acquired Valiance at the Saratoga Selected Yearlings Sale and she’s been a joy to be associated with, taking us to the top of the mountain.  Valiance is regally-bred, a gorgeous physical, and she’s a top shelf performer on dirt and turf.  We are hoping for another positive result in the Breeders’ Cup Distaff and to then showcase her at the historic Newtown Paddocks.”

A daughter of leading sire TAPIT, VALIANCE was purchased for $650,000 at the 2017 Fasig-Tipton Saratoga Selected Yearlings Sale.  Her dam LAST FULL MEASURE, by EMPIRE MAKER, captured the Madison S. (G1) on her way to career earnings of $293,245.  VALIANCE’s second dam, LAZY SLUSAN, was a multiple Grade 1 winning distaffer and millionaire.

“It is always exciting to offer fillies in top current form,” said Fasig-Tipton President Boyd Browning.  “A daughter of Tapit with a fantastic pedigree will be highly desirable to the sport’s leading buyers and owners.”