Fasig-Tipton has catalogued 182 entries for The Gulfstream Sale of Selected Two-Year-Olds in Training, to be held on Wednesday, April 1, in the racetrack's walking ring.  The sale will begin at 2 pm.

The under tack show is scheduled for Monday, March 30, beginning at 9 am.

"The Gulfstream Sale annually offers the highest concentration of quality of any North American two-year-old sale," said Fasig-Tipton President Boyd Browning.  "This year's catalogue is no exception, as it is again loaded with sire power, depth of pedigree, and quality individuals."

Showcased on the front cover of this year's catalogue are several of the sale's recent star graduates.  These include BELLAFINA, winner of the 2019 Santa Anita Oaks (G1), and MIA MISCHIEF, winner of the 2019 Humana Distaff (G1).  MIA MISCHIEF was subsequently sold for $2.4 million at the 2019 Fasig-Tipton November Sale.  Other graduates featured are top three-year-old colts FOUR WHEEL DRIVE, winner of last year's Breeders' Cup Juvenile Turf Sprint (G2); INDEPENDENCE HALL, who took the Nashua S. (G3) at two, and the Jerome S. this year at three; and NADAL, winner of the San Vicente S. (G2) on February 9.  Also included on the front cover is COPANO KICKING, a multiple group stakes winner in Japan.

The catalogue's back cover includes a lengthy list of exciting three-year-old colts and fillies – all graduates of last year's sale.  This list includes Breeders' Cup Juvenile Fillies (G1) runner up DONNA VELOCE, and GOUVERNEUR MORRIS, who captured his 2020 debut this past Friday in near track-record time.  He was second in last year's Claiborne Breeders' Futurity (G1).

"Performance over Gulfstream's dirt surface in the sale's under tack shows has translated to victories in the sport's most prestigious races," continued Browning.  "Gulfstream provides the opportunity to watch two-year-olds perform over a big, dirt racetrack – which has proven to be a tremendous advantage for buyers."

The catalogue is now available online and will also be available via the Equineline sales catalogue app.  Print catalogues will be available from Fasig-Tipton offices in late February.

Fasig-Tipton will also offer a supplemental catalogue once again this year.  Supplemental entries will be accepted on an approval basis. 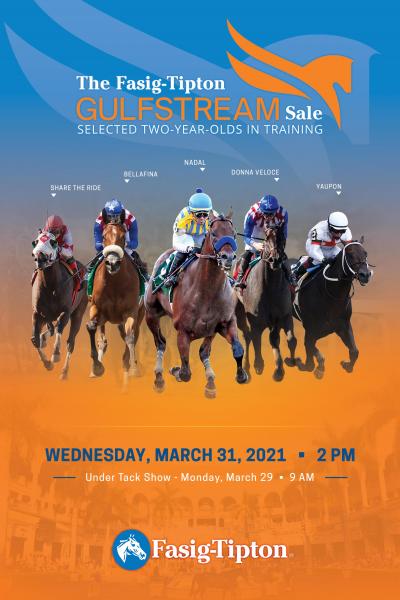