Live auction action returned to Kentucky on July 13 with a robust renewal of the July Horses of Racing Age sale at Newtown Paddocks in Lexington. Conducted as an open sale for the first time, the sale was modified to serve an industry that has been balancing limited racing and sales opportunities since March. All horses offered were on the sales grounds, and buyers had the option to bid in-person, on the phone, or via the new online auction tool.

Graded stakes placed juvenile County Final topped the sale when sold for $475,000 to West Point Thoroughbreds, L.E.B., agent. The gray or roan colt by Preakness S. (G1) winner Oxbow was consigned as Hip 166 by John Ennis Training, agent. The sale topper broke his maiden on debut going 5 1/2 furlongs on the Churchill Downs turf on June 5, wiring a field of straight maidens to win by 4 lengths. He followed up that effort with a second-place finish in the Bashford Manor S. (G3) on June 27, this time going 6 furlongs on the Churchill Downs main track. County Final earned $65,000 in his first two starts for owner-trainer John Ennis and owners Hayden Noriega, and 47 Roses LLC. The colt is a half-brother to two other winners out of the multiple stakes winning Tapit mare Tapajo, from the immediate family of Grade 1 winner Currency Swap.

Per Capita, a winning four-year-old colt by Tapit, sold for $325,000 to Red Oak Stable, agent for Rick Sacco, to become the sale's second most expensive offering. Offered as Hip 85 by Gainesway, agent, Per Capita was a winner last out, breaking his maiden going a mile on the dirt at Churchill Downs on May 24. The colt won once in four starts for owners Peter M. Brant and Gainesway Stable and trainer Chad Brown, earning $65,150. Per Capita is out of the graded stakes winning Orientate mare Successful Outlook, making him a half-brother to Grade 1 winner Sweet Lulu and a full brother to Grade 2 winner Anchor Down and Grade 3 winner Iron Fist.

The session's top filly came in the form of recent Indiana Oaks (G3) runner up Impeccable Style, who was purchased for $275,000 by Bradley Thoroughbreds, agent. The three-year-old winning daughter of Uncle Mo was offered as Hip 53 by Gainesway. The dark bay or brown filly broke her maiden on her second try last year at 2 at Churchill Downs and was most recently second in the Indiana Oaks (G3) on July 8 at Indiana Grand. Impeccable Style has won or placed in 4 of 6 career starts to date for Gainesway Stable, Catalyst Stable, Paul McInnis, Patty Slevin, and Magdalena Racing and trainer Kenny McPeek, with earnings of $134,912. 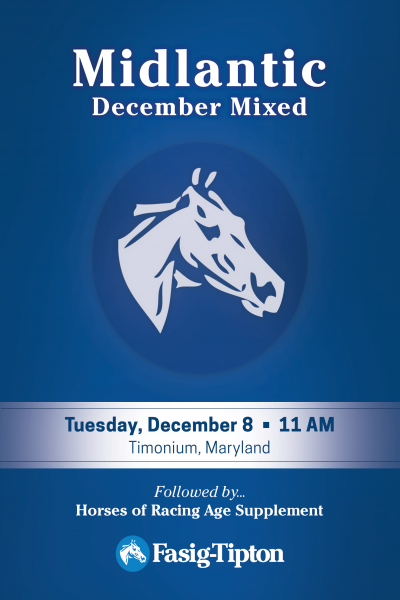